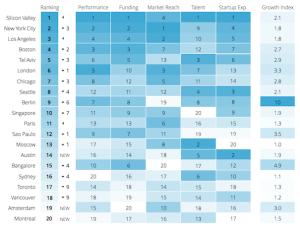 There are over 1000 Startups in Los Angeles County according to RepresentLA.com (see graphic). Compass puts the number at between 5500 and 8300 for the LA/Orange County ecosystem. There is every reason to believe that the ecosystem which has created this current crop of new businesses is likely to continue to produce even more. We are witnessing a massive shift of tech activity into the Silicon Beach area, with established companies opening or expanding existing facilities, and new companies opening with new products and/or support services for those already here.

New York is estimated to have between 7,100 and 9,600 startups, putting them at #2 in the world. The available square miles of land alone creates more potential for LA to grow at a faster pace than the Big Apple. Silicon Valley would present a greater challenge with over double the LA area ecosystem (estimated at between 14,000 and 19,000.) However, the big deal in LA is the merger of tech and entertainment, something that is not available in San Jose. Moreover, there is a remaining industrial base (think aircraft and military) that also gives LA some unique partnership potential.

Los Angeles has some additional features that are hard to match. The University base in the basin is huge. UCLA, USC, CalTech, Cal Poly, Pomona College, Scripps College, Claremont McKenna College, Harvey Mudd College, Pitzer College, the Keck Graduate Institute are all world class engineering and tech schools. There are at least another two dozen colleges, universities, and grad schools that would feel slighted that they aren’t on the list.

There is, of course, a long tradition of entrepreneurship in LA. That means there is already in place support enterprises for the new startups. There is also a robust financial center, including angels and venture capital firms.

When you even think about Los Angeles, there is always that other draw. Las Vegas may call itself the nation’s playground, but the truth lies 4 hours to the West. Beaches, mountains, deserts, and the best weather on the planet will certainly give many young entrepreneurs and engineering geniuses a good reason to choose LA over the cold and wet climes of New York, Boston or Seattle. San Jose can boast of pretty good weather, but it is a pretty long drive to the natural sandboxes and ski slopes for those residents.