Sleeply little Santa Monica may be on the verge of becoming a world-class city. Once a beach town where British transplants could play in the surf by day and darts by night, Santa Monica opens a new phase in 2016 with the coming of a massive new hub and spoke transportation system.

Much has been said and written about the Expo Line, scheduled to open in the Spring, but you won’t find the reality of the transformation located all in one spot. This post won’t fully remedy that either, but it might shed more of a top down view on the impact of the coming changes. 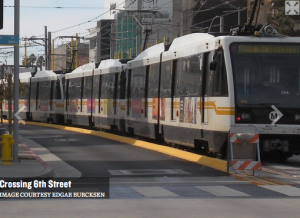 While going 15 miles in 46 minutes doesn’t seem so great on Sunday morning, most of the rest of the time that is likely to beat the 10 freeway and the surface streets. Moreover, in theory you arrive more rested and carefree. Moreover, assuming cost matters at all, the fare will be $1.75 for the trip including transfers to a bus at the other end. Car expense for that trip would be at least double, not counting downtown parking. Overall time, door-to-door during rush hour? Probably about the same. 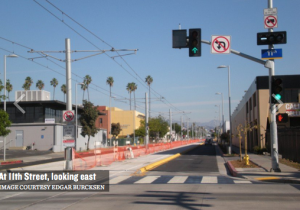 Downtown LA in one hour on your bike

If it takes you longer than an hour to go 14.5 miles on a dedicated bicycle path that is virtually flat the entire way, you may need some exercise. Certainly by week two you should be cutting that time down well under an hour.

Coming with the new Metro Line is the completion of just such a safe bicycle lane from 4th and Colorado in Santa Monica to the downtown station. You can make that trip in sunshine about 80% of the days throughout the year. And once you are in shape, you should beat the train and the cars. If your destination isn’t all the way downtown, you may not even break a sweat except on the hottest days.

Do you really need a car anymore?

The Big Blue Bus, Uber, Lift, shared bicycles, cabs, and shared cars round out a complete transportation system. According to the ArgonautNews.com:

Riders from any of three Santa Monica stations get access to the entire region through a network of light rail, subway and rapid bus transit options.

Breeze Bike Share sponsored by Hulu launched this year in November with 500 bikes at 75 hubs at locations throughout Santa Monica. The number of people riding Breeze will continue to grow, attracted by this new cleaner, greener and more convenient way to go. The same bikes will be launched in systems in West Hollywood, Beverly Hills and Long Beach.

Access to a car when you need it will be provided with car share operated by ZipCar. Members can use a range of low-emission car types by the hour, with 20 cars in public spaces and another 40 cars on accessible private lots.

Big Blue Bus is rolling out new lines and services to provide exceptional Expo integration, informed by thousands of resident and user comments. With many key destinations just beyond walking distance from the new stations and station parking at a premium, first- and last-mile connections will be crucial to maximizing the benefit of the rail line on traffic congestion and quality of life. The plan will leverage the strengths of the current Big Blue Bus route system, and will serve existing riders and attract new riders.

Santa Monica’s promenade and 4th St have been at the forefront of the move to create mixed-use building in Southern California. Now there are multiple plans for large projects all along the Expo Line. While none is in the Santa Monica city Limits, once such center is awaiting final approvals at Olympic and Bundy. Another is proposed for Jefferson and La Cienega. And multiple new projects are at various stages of development in Culver City.

One can easily predict that more of these centers will be built near the Expo Line stations, including those at 17th and t 26th streets. Maybe the Sears property will be another spot where such a complex could be built

It will become more and more possible to live and work within walking distance of almost anything you could normally need. For the few times you do need to go more than a handful of blocks, your options for getting there will easily accessed and inexpensive.

If you are considering a move to Santa Monica, Marina Del Rey, Pacific Palisades, West LA or other Westside Cities, you might want to call a realtor who has been living and working in Santa Monica over many decades. Belle Tsai knows the area, and can help you find and buy the perfect residential property for your needs. Call her at 310-738-7118